A CabWriter user wrote and asked how to integrate three cabinets into one cabinet, at least in appearance. As shown below the center cabinet consists of three boxes: from left to right a Standard Base w/Drawer, a Drawer Bank Combo with 4 drawers and another Standard Base w/ Drawer. The other two cabinets, one on each end, are Divided Base one box cabinets. They are designed for wine bottle storage. 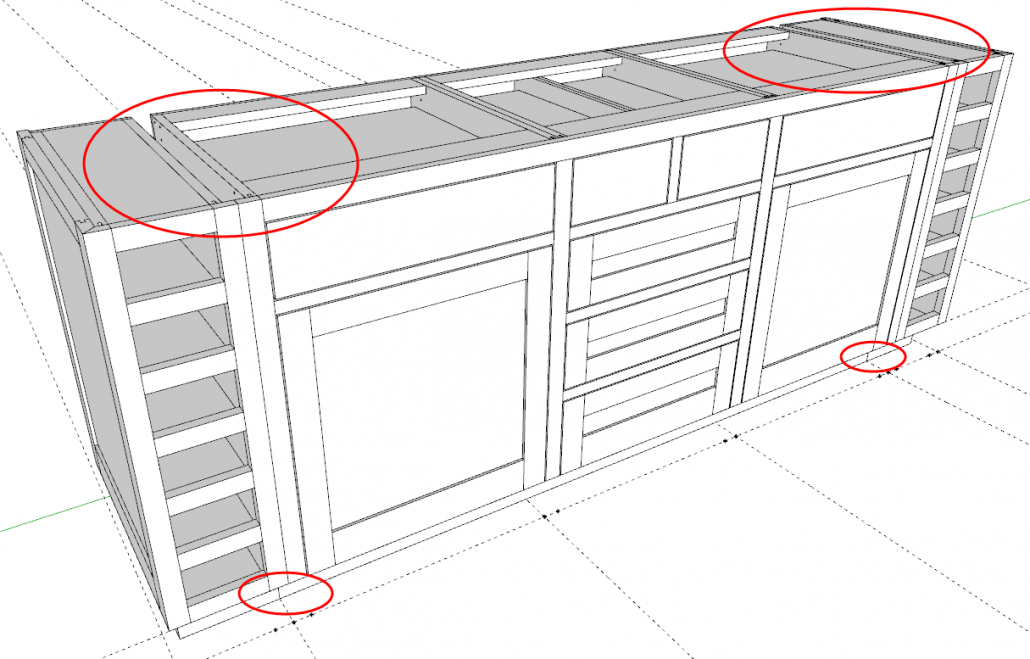 If you look at the two large ellipses at the top you will notice a 1 ½” gap between each Divided Base box and the Standard Base w/Drawer box next to it. I think the assumption the user made here is that adjacent cabinets must stop and start at the same point so that they avoid overlapping. In fact it is often useful for two cabinets to overlap their End Connector Stile(s). This of course means that two stiles occupy the same space but that is easily remedied by deleting one of them. Had these cabinets been drawn that way from the start all of the changes involving the Edit Story Stick tool shown in the video could be avoided. Deleting redundant stiles, editing the top rails and integrating the ladder base would still be necessary. But that is the approach I would take if drawing these cabinets from the start.

Note the small ellipses at the bottom. The ladder base (toe kick) is three separate structures. As you will see in the video this is easily remedied with simple native SketchUp editing. Removing the gaps between the cabinets requires a CabWriter tool called Edit Story Stick. The Edit Story Stick tool has the following capabilities:

Next I will use native SketchUp tools to edit the ladder bases into one structure. Finally I will edit the top rails and two End Connector Stiles to form a one cabinet integrated look with one top rail. See the final design below.

The Final Design Is a Single Cabinet Look and One Ladder Base Structure.

I distributed the 3” additional space equally. I did that to show you how to change all four stiles differently. If I were doing this for real I would have added the entire 3” to the Drawer Bank Combo box because aesthetically the combo drawers would look better. To do this, from left to right, I would have moved the first two stiles 1 ½” to the left and the last two stiles 1 ½” to the right. However there is no right distribution, only a designer/client choice. But realize there are numerous options available.

Now, get some chips or nachos and enjoy the feature film.