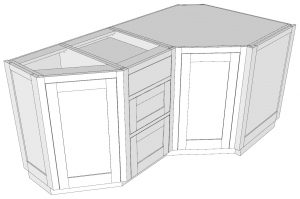 CabWriter does not come with a large cumbersome library of cabinets. This was a conscience decision when we first planned CabWriter. Libraries have major problems not the least of which is you have to maintain them. Library maintenance takes enormous resources and drives the cost of the application up, which is antithetical to our pricing goals.

The other conscience decision we made when first planning CabWriter was to develop it as a SketchUp extension. That way the user could use all the native capabilities of SketchUp to modify and customize anything drawn by CabWriter. You have already seen me do this in the following two video series: 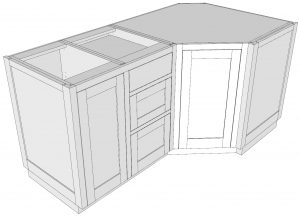 A Standard Base Box Used to Create a Diagonal End Box

Lastly, libraries, though large, are finite and they limit your creativity. The combination of SketchUp and CabWriter does not. In this video I will show you how to create a diagonal end cabinet as shown in the image above right, by starting with the standard base cabinet shown in the image at left. This example will give me the opportunity to demonstrate the use of several CabWriter tools that support customizing and also give you some strategies for minimizing the amount of work you have to do. Let’s start with the latter first.

The following strategies are used frequently in this video. Look for them and observe how they are used.

OK, it is now time to enjoy the feature film. Get the pop corn, kick back and relax as I show you how to customize a CabWriter drawn cabinet.