Have you ever wanted to automatically generate a cutlist from your Sketchup model?  Well, now you can!

CutList Plus fx by Bridgewood Design is the leading tool for generating optimized sheet layouts and materials lists. Initially, Sketchup and Cutlist Plus fx didn’t natively communicate, but that became history with the introduction of the original CutList Bridge. Now CutList Bridge 4 is even more powerful with rich new features. CutList Bridge also supports exporting a cutlist of your SketchUp model to Excel or other spreadsheets, so you can enjoy the benefits of automated cutlist production even without Cutlist Plus fx. If you are a CabWriter user, CutList Bridge comes integrated with the software, but you can use it standalone with any Sketchup model.

What is CutList Bridge?

CutList Bridge is a SketchUp extension which extends the attributes of components to include such things as the material type used in its milling, the species or material name, re-sized dimensions, shop method tags, the sub-assembly to which it belongs and much more. These attributes are attached to the component and stored in the model file. The user can export these attributes to either: a .cwx file, which can be opened in CutList Plus fx version 12.3 or higher; or to a comma separated value file (.csv aka CSV) and subsequently imported to Microsoft Excel, Open/Office Calc or any spread sheet application that supports CSV importing. Either of these methods will produce a cut list but CutList Plus fx will also produce a materials list, optimized cutting diagrams and project costing.

A very important feature of CutList Bridge is that it stores all components’ material and milling attributes in the SketchUp model file. The user need keep only one file of a design and doesn’t have to worry about synchronizing other files when design changes are made. The CWX, CSV, CutList Plus fx, Excel or OpenOffice Calc files can all be reproduced in about four mouse clicks.

1. Changed method convert(string) to recognize the comma as a valid “decimal point” delimiter as used in many European countries.
2. Changed the way bounding box dimensions were calculated to improve accuracy and support CabWriter.
3. Changed the message that informs the user that a file has been successfully exported; changed from “A CSV file has been written to” to “A cut list file has been written to” which works for both .csv and .cwx files.
4. To make CutList Bridge 4 compatible with SketchUp’s 2016 Extensions Policy:
a. Wrapped the entire extension in a module namespace called CutListBridgeIV.
b. Moved UI.menu code out of the registration file and into the loader file.

1. A Legacy Mode checkbox has been added to the Extended Entity Info dialog box Setup tab. If you do not have either a Gold or Platinum CutList Plus fx license of revision 12.3 or higher you should check Legacy Mode. In Legacy Mode you will not be able to export the Tags, Fin T, Fin W and Fin L columns. Legacy Mode is unchecked when CutList Bridge 4.0 is installed.

4. Fixed an issue with Add Material when the material name contained the inch unit mark (“), which caused incorrect behavior with the list drop down boxes.

5. Some users have experienced problems with materials.csv files that contain Euros currency. This problem is solved in CutList Plus fx version 12.3.

You will be sent to the SketchUp Extensions Warehouse to purchase this extension. 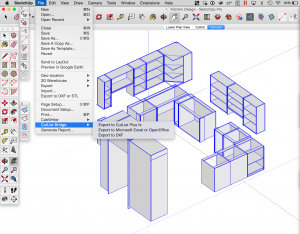 Cutlist Bridge to Cutlist Plus fx